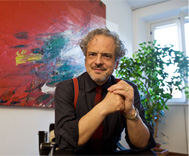 Battistelli is without a doubt the musician who is most protective of his independence that I know. He carefully keeps his distance from genre classification and factions, but not from the most daring ventures into experimentation.
Daniel Charles

Giorgio Battistelli was born in Albano Laziale on April 25 1953. His first approach to music was with the violin followed by clarinet, double bass, piano and finally percussions. He received his diploma in composition in 1978 under the guidance of Giancarlo Bizzi from the A. Casella Conservatory in L’Aquila and also studied the history and aesthetics of music under Claudio Annibaldi.

In 1972 he and some friends founded the improvisation group ‘Edgard Varèse’ as well as the instrumental ensemble ‘Beat ’72’. In 1975 he attended composition seminars in Cologne held by Karlheinz Stockhausen and Mauricio Kagel. In 1978-1979 he took courses in technique and interpretation in contemporary music theatre in Paris with Jean Pierre Drouet and Gaston Sylvestre. During this period he composed various works for solo percussion and wrote Il racconto di Monsieur B for orchestra which debuted in Tokyo (1980). In the 1980s he established himself as one of the most interesting composers of his generation thanks to works like Experimentum Mundi, that has been performed extensively around the world with actors such as Bruno Ganz and Philippe Leroy; Aphrodite, a monodrama of ancient customs that was later interpreted by Vladimir Luxuria; Jules Verne, brought to the international scene by the Trio Le Cercie directed by Michael Londsdale; Kemplers Traum, an opera developed with Studio Azzurro and performed by Moni Ovadia and later conducted by Daniel Harding and directed by Claus Guth; Le combat d’Hector et d’Achille, for two musical orators; Globe Theatre, a ballet choreographed by Virgilio Sieni; and Anarca, commissioned by the Orchestra Nazionale della Rai in Rome.

In 1983 he received a scholarship to study at the radiophonic studios in Baden-Baden. In 1985-1986, an invitation by the Deutscher Akademischer Austauschdienst brought him to Berlin. His work has been published by the Casa Ricordi record label since 1986. In 1990 he won the SIAE award for opera and in 1993 he received the Cervo award for contemporary music. That same year, he was nominated by Hans Werner Henze as his successor at the Cantiere Internazionale d’Arte in Montepulciano where he was Artistic Director until 1996. He then began to concentrate on theatrical production. Some of his more important works include Teorema, co-produced with Maggio Musicale Fiorentino and the Munich Biennale and later performed at the Teatro dell’Opera in Rome directed by Luca Ronconi; Frau Frankenstein, commissioned by the Ensemble Modern; Prova d’orchestra, commissioned by the Opéra National du Rhin in Strasburg conducted by Zoltán Pesko.

From 1996 to 2002 he was Artistic Director of the Orchestra della Toscana. During this time, he collaborated with Luciano Berio’s Centro Tempo Reale in Florence and the Centre for Computational Sonology (now ‘Sound and Music Computing’) at the University of Padua and composed many works including The Cenci, a music theatre production commissioned by the Almeida Theater in London based on Antonin Artaud’s adaptation; La scoperta della lentezza, commissioned by the Theater Breman; Il fiore delle mille e una notte, a ballet by Pier Paolo Pasolini; Impressions d’Afrique, music theatre piece based on Raymond Roussel’s work and directed by Georges Lavaudant; and Etüdeper for grand orchestra that held its world premiere in Berlin conducted by Daniele Gatti.

In 2002 Auf den Marmorklippen was presented at the Mannheim Nationaltheater conducted by Ádám Fischer and performed by La Fura dels Baus Theatre Company. This period also saw the staging of his music theatre productions The Embalmer, based on the text by Renzo Rosso and starring Ian McDiarmid; L’autunno del Patriarca; Combattimento di Tancredi e Clorinda, presented at the Festival di Ravello with the direction of Mario Martone; Riccardo III, libretto by Ian Burton, directed by Robert Carsen and acclaimed by Opera News Magazine as one of the top twenty operas of the century; and Miracolo a Milano, directed by Daniele Abbado which premiered at the Teatro Valli in Reggio Emilia. His symphonies include Meandri, commissioned by the Teatro alla Scala Orchestra conducted by Riccardo Muti; and Afterthought, commissioned and performed by the Orchestra dell’Accademia Nazionale di Santa Cecilia conducted by Antonio Pappano.

In 2003 he was conferred the title of Chevalier de l’Ordre des Arts et des Lettres by the French Ministry of Culture and he has been nominated “Commendatore dell’Ordine al merito” of Italian Republic in 2013. He has been a member of the academic staff at Santa Cecilia since 2004. From 2000 to 2005 he was Artistic Director of the Società Aquilana dei Concerti and he held the same position from 2005 to 2007 at the Accademia Filarmonica Romana.  He was Composer-in-residence of the Antwerp Opera in 2005-2006, and Artistic Director of the Venice Biennale Music in the years 2004-2007 as well as of the Fondazione Arena di Verona for the 2006-2007 season.

In 2006-2007 he taught at Aldeburgh Music where he held a course in music theatre for the Jerwood Opera Writing Fellowships and was Composer-in-residence of the Deutsche Oper am Rhein in Düsseldorf in 2007-2008. Since 2009 he has been President of the Società Aquilana dei Concerti. In May 2011 he resumed his role as Artistic Director for the Orchestra della Toscana. His more recent compositions include Lettera a Francis Bacon, performed in 2007 by the Orchestra Sinfonica della Rai conducted by Jukka-Pekka Saraste, and the operas The Fashion (commissioned by the Deutsche Oper am Rhein in Düsseldorf) and Divorzio all’italiana (commissioned by the Opera National de Lorraine directed by David Pountney), both written in 2008. In 2009 he won the “Herald Angel Award” given by the Scottish music critics for Experimentum Mundi. The year 2010 saw the production of Sconcerto featuring Toni Servillo in a theatrical tour that surpassed 40 performances. The composition is based on a text by Franco Marcoaldi and was awarded the Grand Prize at the “Mess” International Festival in Sarajevo. In 2011 Piccola ouverture all’italiana conducted by Lorin Maazel premiered in Washington to celebrate 150 years of Italian unification, while his anthem, I-150, was performed in Fabriano by the Orchestra Filarmonica Marchigiana and twenty non-EU immigrant street musicians. In 2012 he composed symphonies commissioned by the Orchestra Sinfonica Nazionale della Rai (Tail Up, conducted by Susanna Mälkki), the Münster Symphony Orchestra (Pacha Mama), the Saint Paul Chamber Orchestra (Mystery Play), and the Orchestra Haydn di Trento e Bolzano (Sciliar). His theatrical productions also continued with the premier of Il Duca d’Alba, the completion of an unfinished work by Gaetano Donizetti, for the Antwerp Opera. 2012  was also the year of the debut of the oratorio Napucalisse for Teatro San Carlo in Naples, as  Composer-in-residence of the theater. Furthermore, he held the music theatre masterclass “Progetto Opera” at Accademia Chigiana in Siena in July of that year. In 2013 Battistelli started working on Lot, his biblical opera commissioned by Hannover Staatsoper. His opera for Teatro alla Scala is set to premier on May 2015 at the inauguration ceremonies for the Milan Expo. In October 2016, Il medico dei pazzi was filmed at the Malibran Theater, under the musical direction of Francesco Lanzillotta as a member of the orchestra and at the chorus of the Teatro la Fenice. At the premiere of October 15, four reruns followed. In April 2017, Lot was commissioned by the Staatsoper Theater in Hannover and performed with the Staatsoper Orchestra and Choir. Also in 2017 Orchestra rehearsal from the Münster Theater, Münster Symphony Orchestra, under the direction of Fabrizio Ventura. In 2018, Riccardo III was taken over by the Teatro la Fenice, directed by Robert Carsen and in the same year he was awarded the 2018 “Franco Abbiati” Award for the “News for Italy” category. In February 2019, the 7 minutes Opera was commissioned by the Opéra National de Lorraine, with the libretto by Giorgio Battistelli (freely adapted from the text of the same name by Stefano Massini).

Since January 2020 he has been Artistic Director of the Puccini Festival in Torre del Lago.